But when the house is quiet, I can think. I completed some work for college (my Masters program) and was able to write a blog post earlier. Now I’m sitting at the computer listening to my music, wishing I had the magic secret to get rid of all of my ailments.

I’m waiting for the approval for botox (for the migraines) but the nurse said that could take months. Thanks insurance company. The fibro is pretty well managed, at least the nerve pain. The weakness, fatigue, muscle spasms, and all the other fun stuff are still here. But I manage. I think the migraines bother me more than the fibro because they never leave. At least the fibro only hits me hard when I’ve done too much. I mean it’s always there, don’t get me wrong. But some days I can be pretty productive even with the fibro pain. The damn migraines drive me insane though.

I read earlier about a woman that suffered from migraines for so long that she took her own life. I can say, as sad as it is, that I can relate. The pain is unbearable. The lack of proper treatments is unreal. The doctors think we are pill seekers. (Or radiation seekers…that’s for another post!) Nobody can understand the pain involved, the nausea, the dizziness, the sensitivity to every damn thing, and the frustration we feel when we can’t do something we want to do, unless they have been through it too.

And there are so many triggers! Food, scents, lights, colors, it’s unreal. I cannot pinpoint one thing that causes mine. The triggers seem to change from day to day.

June 16th will be 2 years with a constant headache, and migraines at least 5-6 days a week. Yeah, you read that right. My head hurts constantly. The one or two days I don’t have a migraine are the days I recover from the week long struggle. And I got a letter from a lawyer hired by my insurance company. They want to be sure no third party is responsible for my treatment such as an employer or car insurance company. See, they think I was involved in some kind of accident. 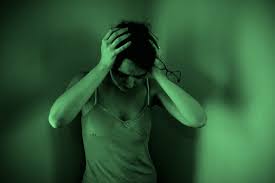 Perhaps they should check my medical records. It’s well documented. I went to bed on June 15, 2015 perfectly fine. I woke up on June 16, 2015 with a terrible migraine. And it never, ever left! There was no accident. No work injury. I woke up like this. I guess they don’t believe me. Well join the list of others that don’t believe me. Sometimes I think my family doesn’t even believe me.

Believe me, this is all too real. I mean, who the hell would want to fake this? Get real!

Well, after all that, I suppose I will try to sleep.